Thanksgiving, A day for Respect and Appreciation 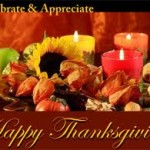 Without feelings of respect, what is there to distinguish men from beasts?- Confucius

If you’re reading this, congratulations!

No, you haven’t won a car or anything like that. But by you reading this, a couple of things are assumed: you have access to a computer, you can read, and you’re alive.

That’s more than a lot of people can say.

It’s a lot to appreciate and respect, isn’t it?

That’s what Thanksgiving, both a Canadian and American holiday, is about. Thanksgiving, always on the fourth Thursday of November, is a time to reflect on your life in a positive way – something that most of us tend to have a problem doing- and to be thankful for what we do have, because we do have a lot. It’s an interesting to think about, because we tend to take things for granted.

The origins of Thanksgiving are a little strange, though. (Commonly debated, for the purpose of this blog I am putting the logistics of the event aside. This is purely what the common American knows about Thanksgiving, more like a general overview. ) When the Pilgrims and Puritans came to the Plymouth in the New World in the 17th Century, they had a hard time adjusting to the climate. They didn’t know the land very well and as a result had a difficult time acquiring food supplies. Thankfully, though, the Native Wampanoag people were able to teach the settlers the way of the land, and the first Thanksgiving occurred in 1621. It lasted 3 days, and 53 Pilgrims and 90 Natives attended. It was tradition to give thanks and prayers for a good harvest or victory, and it became an American tradition during the Civil War in 1863 under Abraham Lincoln.

(Side note: Thanksgiving for Canada is a little different; I will be focusing just Thanksgiving in the States.)

For Thanksgiving, families and friends get together – it’s like a family reunion for the whole country! There’s usually a huge feast – everyone begins with the famous roasted Thanksgiving turkey, though, (yummy)! The turkey is the main dish and is attributed as one of the foods the First Thanksgiving contained – it’s one of the few foods that we kept as tradition. Now, we have delicious mashed potato, mac and cheese, squash, cranberry sauce, gravy, and all other foods that were probably not present for the First Thanksgiving.

My family usually starts preparing a month before for Thanksgiving. Every year, someone decides to have Thanksgiving in their house. We all join in that evening and help out as much as we can with the cooking. Everyone is running around, the teens are happy that they get a day off from school, the younger kids are playing with each other and the adults (most of who don’t see each other often) socialize, and for that day everyone in the family is together. Generations get together and act as one.

Then, when the meal is set and ready to serve, we wait and say grace. Usually, there’s a speech of appreciation, happiness, thanks, and then, we feast. It doesn’t have to be religious – it can be secular. In my family, it depends only on the individual. It doesn’t matter if someone is Jewish, Christian, Muslim, Buddhist or atheist – Thanksgiving goes across all religions because it’s up to the individual to include religion or not.

For the most part, Thanksgiving across the United States usually goes that way, so when you come to the States (hopefully soon!) you’ll stuff yourself silly with some yummy food.

Believe me – a lot people have special pants for Thanksgiving to make room for food- it’s THAT good.