“Matching is better than ranking!” (Learning and living at University of Washington-Bothell)

When discussing college applications, a lot of Chinese students or parents might place the ranking of the institution as the top priority. From my 3.5 years of experience of studying at UW Bothell, I truly feel that how an institution can help a student grow and develop themselves is more important than ranking. Five years ago, I was a high school student in Chengdu. During a party, I spent time with my mom’s friends who just came back from visiting Seattle. I had a chance to learn about Seattle for the first time, and enjoyed looking at all of her photos of Washington’s mountains and city views. I was inspired, and soon began applying to the University of Washington and a couple of other institutions in Washington. After all the hesitation and research, I chose to study at UW Bothell.
I was not familiar with the city of Bothell at all at that time. When I visited the UW Bothell campus for the first time, I saw a pool table and the notice board which -reminded me of the American high school dramas, such as Twilight and High School Musical. UW Bothell looked like the typical university that is portrayed in movies.
On my first day at UW Bothell, I moved into the dormitory called Husky Village. I saw a lot of American parents who were helping their sons and daughters move into their new place, and they had brought a lot of furniture with them! The UW Bothell dormitory seemed to be much better than the 8-person bedroom that other universities offer, because it is an apartment style. There are a lot of buildings, and each building has about six apartments that are named after different trees native to the Pacific Northwest. Two to six students live in each apartment, and they share the kitchen, living room, and bathroom. In my own apartment, I got my own bedroom and my two other roommates shared the other bedroom. One of my roommates is from Hong Kong and the other is from Washington State. The overall dormitory experience was great. We took turns cooking, and my American roommate even brought her TV from which we would watched the Chinese Mango Channel Sometimes together.
Before starting my degree studies, I studied English for six months in the UW Bothell English Program. The class-size was small and the studies were intense. From Monday to Friday, I had class from 9AM-3PM. I spent my spare time mostly on homework, school events and exercising. It was honestly the most “regular” time I had in university.
After starting my undergraduate program, UW Bothell’s small class-size and class group activities gradually helped me feel comfortable to express my ideas. I joined the Chinese Student Association (CSA), starting from being the event coordinator in 2013 to the president in 2014. Because of CSA, I gradually knew many more people at school, and I developed a lot of new skills that I never had before. I applied for an on- campus job for the first time, which was not only a job but also another source of friends and amazing colleagues. They are like my family in the U.S. who care about my classes, my health and personal development. I really feel that every day I learn a lot of new things at UW Bothell.
As a UW Bothell student, you can also take classes at the UW Seattle or UW Tacoma campus. I did take some classes at UW Seattle to experience what I can do in a large class. One of the cinema class I took had about 160 students in the classroom. I had to say that although I loved the class content and the professor, I did not fully enjoy the class. I realized that I prefer a quiet, small campus where there is more opportunities to get to know and talk with your classmates and professors. All of the experiences that I have on my to-do lists while at UW Bothell have been completed one by one. Looking back to the first year when I came to the U.S., I really see how different I am now. I feel more confident, passionate, and inspired because I’m capable of things I did not think I could do before, such as working in a school office, managing a student organization, collaborating with various UW organizations and local businesses.
If I didn’t come to UW Bothell, all my experience might not be “checked”. So I feel lucky to have studied in a university that matches me. And I hope you can find a university that matches you as well. Good luck! 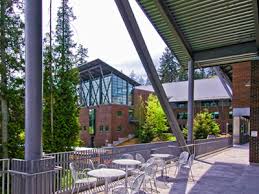