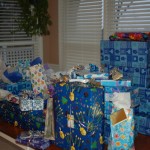 This year in the US, the major holiday of Thanksgiving, a national holiday, will coincide with the minor, albeit widely celebrated Jewish holiday of Hanukkah. Although it may seem like these holidays have never been on the same day before, they were back in 1918 and will be again in 2070.

If you are curious why this happens, it is because neither holiday is a fixed date on the (Gregorian) calendar. Thanksgiving is celebrated on the 4th Thursday in November by US federal law and Hanukah is set according to the Jewish lunar calendar as the 25th night of the month of Kislev.

Hanukah commemorates the miracle of lights. After a battle which the ancient Jews won, they needed to reconsecrate their temple. However, there was only enough sacred oil for one day. Miraculously, the oil lasted for 8 days, long enough to procure more sacred oil. Consequently, the holiday is associated with foods fried in oil: latkes (potato pancakes) and donuts, as well as the lighting of a menorah: a special candelabra with spaces for 9 candles – one for each night of the holiday, plus one to light all the others. In many families, each person has his own menorah and they light them together each night. Traditional activities include a game played with a top called a dreidel and songs. Additionally, American Jewish families often exchange gifts, complete with themed wrapping paper, bows and tags.

As for Thanksgiving, all Americans celebrate this commemoration of a feast held in 1621 by the pilgrims of Plymouth and the local native Americans to celebrate a good harvest. Traditional foods are served: Turkey with stuffing, winter vegetables such as squash and sweet potatoes, cranberry relish, and pies and are similar to what was served in 1621. Often this lavish meal is served in the early afternoon, allowing time to roast the turkey and serve it fresh from the oven.

Other traditions are not so tied to 1621, such as watching the Macy’s Thanksgiving day parade on TV, or in person if you are in NYC, football games both playing and watching, and shopping the next day for Christmas presents and Hanukah gifts. Many people travel to be with family, making the Wednesday before Thanksgiving one of the busiest days on the nations’s roads and in the skies.

This year, my family will celebrate Thanksgivukah on the 28th with latkes alongside the turkey and donuts with the pies for dessert. 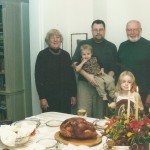