A Trip to Chicago 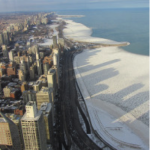 Hailing from the Netherlands, Esther is an exchange student at the University of Kansas. In this article, she shares with us her traveling experience in Chicago.

Visiting Chicago in the winter might not be a good idea. So what?

I’ll be honest with you and say that visiting Chicago in the winter was maybe not the smartest idea. However, I wanted to see this city before I went home, because it is relatively ‘close’ to Kansas. And when I found out that one of my favorite bands, Twin Forks, was actually playing in Chicago, I figured I’d schedule my trip around their tour date.

Coming from sunny San Francisco, Chicago was a bit of a shock. I went from about 16 degrees to a wind chill temperature of -14 in one day. Chicago was covered in snow and I was super happy that I brought my waterproof hiking boots, but I was not super happy about the cold. Covered in five layers I ventured outside and ended up back inside somewhere pretty quickly; the Willis Tower Skydeck (this used to be the Sears Tower). This is the one with the ledge: glass boxes that extend from the side of the building. If you step on it, it feels like you’re walking on air. This was a pretty cool thing to do!

The next day I went to see the famous bean in Millennium Park along with a Russian girl I met the previous day at the Skydeck. After that we went for deep dish pizza at Lou Malnati’s. Then I headed out to The Art Institute of Chicago and I walked around for about four hours. I loved this museum! Afterwards I met up with a friend from UCLA who now lives in Chicago and he and his girlfriend took me out for sushi and then we went up to The Signature Lounge, which is a bar on the 95th floor of the Hancock tower! I also went up the Hancock tower by daylight and did the Tilt! thing, which wasn’t very scary. Another cool thing was that I was staying in Wicker Park and that the movie High Fidelity was filmed just a couple of blocks away from my hostel! At the end I took the train back to Lawrence.