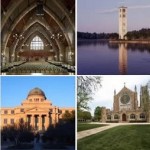 To tell which is the best college in the U.S is hard. It isn’t easy because there are so many colleges out there, and they all exhibit such different advantages that picking one over the others is never an easy game.

This article explores well-known U.S. colleges, and, instead of making a top 20 list of U.S. colleges, it ranks colleges by group according to their general public reception or reputation. For instance, the three top universities (Harvard, Yale, Stanford) belong to group one, followed by the second group that has MIT, UC Berkeley, Columbia and so on.