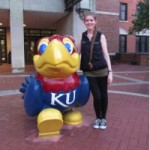 From the 6th till the 11th of August I had my You at KU Graduate International Orientation. The first day contained lots of waiting in line and filling out forms. The other days mostly consisted of lectures about topics like campus safety, banking, and cultural adjustment. Most of them were pretty boring haha, especially since I’ve had a similar orientation before at UCLA. Besides attending lectures, we also had dinners, parties, a scavenger hunt, a campus walking tour, and group meetings. There were about 220 graduate students, so they split us up into smaller groups. At the beginning of the week our group had 18-20 people, but at the end we were left with 5-6 cause people just stopped showing up.

I’m pleased to say that I attended every single thing on the orientation schedule and more. I was happy that I didn’t have a jet lag anymore! I met some pretty awesome people from all over the world during the last couple of days and I found myself in unexpected but very fun places. We received so much information in such a short period of time though, so I’m not sure if I’ll remember everything and everyone haha. What I do remember is complaining to everybody (sorry about that 😉 haha) about the fact that I had to take an English proficiency test. It took four hours and I thought that was a waste of my time, but oh well, I passed it.

Yesterday we had a ‘farewell’ pizza and bowling party, which was fun! Our group won the scavenger hunt and our prize was a five dollar gift card to Starbucks and a free sub at Jimmy John’s for each of us. During the next two weeks there are still a lot of events I want to attend and appointments I have to go to, but my schedule is a bit more flexible until classes start on the 25th of August.