Watch Out Student Entrepreneurs: Here’s A Program to Get You Funded 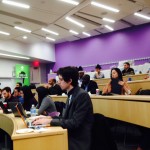 Raising money is no easy task. But if you’re a student entrepreneur, congrats — your chance of getting funded would potentially increase. Thanks to the grant and mentorship program offered by Founder.org.

Founder.org is a San Francisco-based nonprofit organization. Founded in 2012 by Michael Baum, the organization describes itself as an investor and accelerator for student startups.

Gearing toward facilitating ideas developed by student entrepreneurs, the program has attracted thousands of students from leading universities around the globe to compete in its annual grant (between $10K and $100K) and mentorship program. 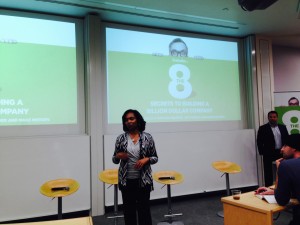 At NYU Stern School of Business.

This year’s kick off event was held at NYU Stern School of Business on November 19, 2014. The event featured an official announcement of the Founder.org Class of 2016 application, introduction to 8D Company Building Program, 60-second pitches from student startups, and personalized feedback for top 3 pitch teams. Tony Ayaz, executive at the company, hosted the event.

The program is only open to applicants from partnering universities. According to Founder.org, it currently has partnerships with 24 universities from all over North America and Europe, including Harvard Business School, Stanford University, UC Berkeley, University of Oxford and University of Zurich. All currently enrolled students, recent graduates (within one year) and faculty members are eligible to apply for the program. 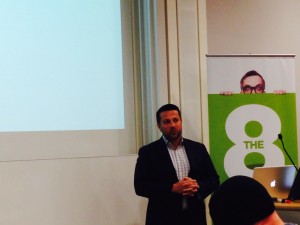 Tony Ayaz was giving an introduction to the Founder.org program.

According to Ayaz, there’s no restriction on the number of members per team who are applying, though a team of 2-3 founding members is ideal, according to previous practices.

In addition to getting funded, student entrepreneurs also get mentorship benefit from the organization, which consists of one-on-one advising sessions by experienced entrepreneurs selected by Founder.org.

The goal of the program, according to an article by Readwrite.com, is to “significantly increase the number of student entrepreneurs by backing the brightest student founders and biggest ideas.”

There were 10 winning teams in the first year of the program. Last year, the program expanded five-fold, allowing a total of 50 lucky teams to get funded and mentored by Founder.org.

Smart Vision Labs, one of the winning team from last year, spoke at the November 19 event, and shared with attendees their experience of forming a team, building the product and obtaining professional advice from Founder.org. The team recently won $1 million at the Verizon Powerful Answers competition, according to an article by InTheCapital.

Interested entrepreneurs can apply via Founder.org. Application is already available since November 1, 2014, and will close at the end of March, 2015.