The kind of volleyball you might never heard of 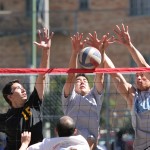 Nine-man volleyball is a game unlike the conventional five-man volleyball where people rotate their positions. In nine-man, no one rotates and almost anything goes- but not quite. I just know that growing up, I was quite confused about the proper way to play volleyball.

This weekend, I took some time off from working on IntroAmerica to engage in a family tradition, watching nine-man volleyball down in Chinatown and catching up with a few relatives. I had no idea that there had been a NY Times article about the sport three days earlier where the key person in the article would be my own brother. Instead, I had merely thought to amuse and distract my mother, who had gone to many games in the past because of my father’s interest as a player and coach, by inviting her to visit. Also, I had happened to be in New York and I knew my dad’s cousin had come down from Boston.

As I mentioned previously, the main difference between nine-man and the rational volleyball game is the number of players. Nine-man has nine players on each side in contrast to ‘six on six’ for the traditional game. Nine-man also utilizes a larger court size and the game is played outdoors on pavement.

The NYC Times article has a video explaining how the game is played and explained that the game kept many Chinese men active with physical diversions on their day(s) off since the 1930s. Surely, they were useful during the period when Chinese women were not allowed to come to America. I don’t know where the game originated when it came to the US- West coast because of the gold rush, or east coast because a few Chinese did make their way here to be students, laundrymen and restaurant workers during the difficulties in China during the 20th century. No matter where the game came from, nine-man was able to survive because the game helped people who experienced social exclusion back in the day felt feel a sense of community and social interaction.

Gradually, nine-man has become a signature of Chinatown’s all over America. Since the 19th century, Chinese-Americans has played nine-man on the streets and parking lots in Chinatown. The game holds a special meaning to those who play and those growing up in the Chinese- American community. Nine-man is a living witness of a vibrant American society where the assimilation of different cultures and ethnicities takes place. Immigrant generations assimilate into a common culture but they remain distinct in some ways. Nine-man is one of a few cultural characteristics that remain the same through out the years. The rule stating that two-thirds of the players have to be 100% Chinese definitely uphold the tradition.