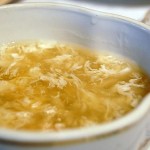 Despite its mundane appearance and unattractive jelly-like texture, the edible Bird’s Nest soup, commonly consumed with rock sugar, is a luxurious traditional delicacy that is highly regarded by the Chinese society, regardless of their status. What’s more interesting is that its existence has a history that dates back to early beginnings of the Chinese society.

The Bird’s Nest, a dish known for its invigorating impact, was once a supplement that was served only to the Chinese emperors because of its rarity, labor needed and danger faced when retrieving the precious herbs. It was only at the turn of century that this dish became available to general public. However, even so, it was only the elite and wealthy who could afford them. Today, because the society consists of many well-educated and capable individuals who have greater spending power, they are able to afford this high quality good – the Bird’s Nest.

So, the question is, “what exactly is the Bird’s Nest made of?” and “What makes the Bird’s Nest so special?” The Bird’s Nest is the nest of Swiftlet Swallows and is created by these swallows through the secretion of their saliva. As humans purchase or rent an apartment when they are mature and ready to start their independent life, these birds start building their nests when they are ready to start the next chapter of their life. The optimum period to harvest the nest is when the swallows have migrated to a new location because then the swallows will not be affected.

The unique thing about the Bird’s Nest is that its effect can only be experienced when consumed regularly and religiously with the condition that the Bird’s Nest is pure. Meaning, it is free from contamination by even the slightest bit of any form of chemicals. In fact, loyal consumers of the Bird’s Nest have indicated that consuming it reduces fatigue, boosts their energy level and leaves you with radiant skin.

Therefore, if you are an adventurous food lover, lengthen your to-try-food list by including the edible Bird’s Nest soup. It is definitely worth the try because not only will you be exposing yourself to one of the most highly regarded delicacies but also a healthy one.