Balmain and Why It’s Everywhere

When you think of French fashion, which brands come first to your mind? Givenchy, Chanel and perhaps Dior to name a few. Rarely will one mention Balmain. Yet Balmain is one of the most influential fashion labels in the world today with Anna Wintour to Rihanna representing the brand’s look day to day. Three years ago, Balmain hired Olivier Rousteing as its new creative director and since then the brand has become more recognized and respected within the fashion industry. Sales have doubled, marketing has increased and many more individuals are identifying with the simple and understated French label.

Pierre Balmain first introduced his collection in 1945, post World War II. It wasn’t until the 1950’s however that his collections began to take over fashion’s major cities such as Paris, New York and Los Angeles. By then the fashion house was known for it’s long skirts and classic tailored suits. Evening gowns also received Pierre Balmain’s creative attention – pairing gowns with jackets and outerwear and inventing a more modern and urban look. For the 1950’s this was a major alteration for classical eveningwear. Balmain continued to design collections each season and eventually turned to costume design for Broadway and theater in the United States. Hence, Balmain continued to become more recognized within the United States, winning several Tony Awards for his designs.

It wasn’t until recently however that Balmain took over the fashion world by storm. With Olivier Rousteing as the brand’s newest creative director, Balmain has not only redefined itself, but also recreated itself as a successful and innovative label. Three seasons ago, as denim on denim reintroduced itself in the fashion industry, Balmain was able to take this trend and recreate it into a more chic and sexy look. In addition, the brand’s eveningwear was reinstated into a more sensual and appealing way. Leather jackets and apparel were also added to each new season. New and original ideas were envisioned piecing together classic trends with modern trends. 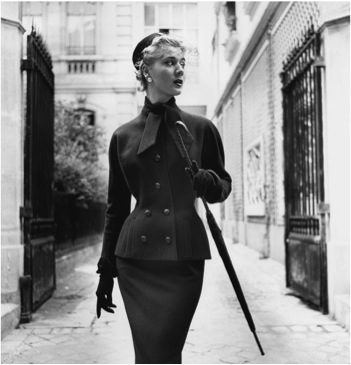 With renowned fashion directors to countless celebrities representing the brand, it’s clear that Balmain is here to stay. With its unique trends and styles, Balmain has successfully proven itself as a pioneering and fashion forward label that will continue to surprise the fashion industry for years to come.