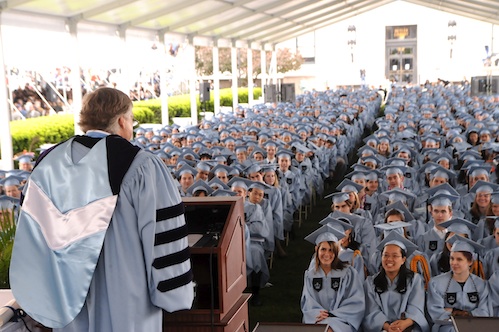 To every student, the highlight of their college experience is celebrating their graduation with their parents and friends. As I just celebrated my own, I’m going to share with you my experience of the Columbia University graduation ceremony. I have not only attended two ceremonies, but also read some blogs about commencements. I found that actually all of them are pretty similar, so in this essay, I would like to use my graduation as an example to explain what it like to graduate in the US.

Before coming to the graduation ceremony, I want to start talking about the ceremony’s preparation work. Most schools would ask you to register for the graduation ceremony first, so bear in mind to register in time, avoiding any unnecessary inconveniences. In the mean time, you should also go get the parent’s invitation letter from your college, so your parents can take the letter and the other related materials to apply for their visa from the embassy. The early you get the invitation letter, the better, because it would allow more time for your parents to acquire their visas. Last but not least, there are different kinds of gowns for each level of degree, so be careful not to pick the wrong one. Another important thing you should know is that usually a graduation ceremony is very crowded. What’s worse is that graduates and parents are not sitting with each other. Therefore, I suggest you meet up at an agreed to place after the graduation ceremony. Otherwise it may be difficult to connect with each other as the ceremony site is normally very crowded. Your cell phone signal could be very weak complicating the situation.
Next, let’s turn to the graduation ceremony. Our department graduation ceremony was held on May 17. We met in the place arranged by our university and walked to the ceremony site together. Columbia University has gigantic white shed which is open on all sides and the graduates sit under the roof as its graduation ceremony site.
First, the dean gave his welcome speech and then distributed awards to honored students and staff, from whom representatives had been selected to give their comments. The department also invited one of its distinguished alumni to deliver a speech. Our alumni speaker was the founder of Shutterstock. I loved his speech. He told us that as an entrepreneur, the most important thing to do in order to create value is to embrace failure and your failure will eventually turn into your most valuable treasure. At last, we came to the most exciting step — shaking hands with the dean and the president. All students lined up to shake their hands. Actually I believe every student feels so fulfilled at this moment because it is a symbolic moment of your life especially with your parents watching. At the end we concluded our department graduation ceremony with our collective singing.

Two days later, we had our university commencement that was very similar to our department graduation ceremony. The only difference is that in the university commencement, distinguished alumni were conferred an honorary doctoral degree for their outstanding contributions. The special honorable doctorate hood was placed around their neck. Then at the core of the graduation ceremony, the deans of different departments asked the president of the university to grant the degrees to each student. After all the degrees have been conferred, students screamed and shouted with joy. The collective singing marked the official end of the commencement. Then the students were free to meet their parents and have their parents meet their friends. Lots of photos were taken around the campus.

The last thing I want to say is that Columbia University and New York University (NYU) are the two most famous universities in New York City. They both have very grand commencements. Columbia University holds its graduation ceremony on its own campus that becomes very crowded during the big event. New York University doesn’t have a centralized campus, so its commencement is usually held in Yankee stadium which makes the ceremony very spectacular. To celebrate graduation, the Empire State Building lights up Columbia blue or NYU purple to honor the two universities’ commencements. The view is really great. 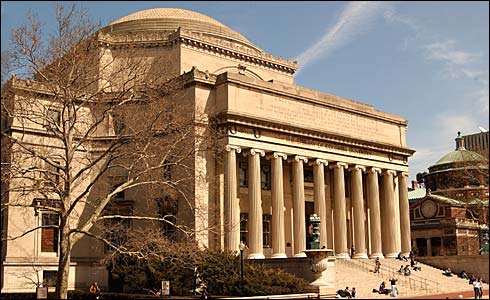