Which college campus arrests the most students for alcohol and drugs?

A report from Rehabs.com utilizes the latest data available from the U.S Department of Education’s Office of Postsecondary Education for all colleges receiving any federal financial aid.

The analysis Rehab.com published certainly had some interesting data. The University of Wisconsin-La Cross has the most on-campus alcohol arrests per capita among large universities in the country, and the University of New York at Oneonta came in at number one on the list of colleges with the most on-campus drug arrests per capita in the 2012 reporting year.

Here is the list of colleges with the most on-campus alcohol arrests per capita in the 2012 reporting year. The report also provided geographic information with the institutions marked on a map. 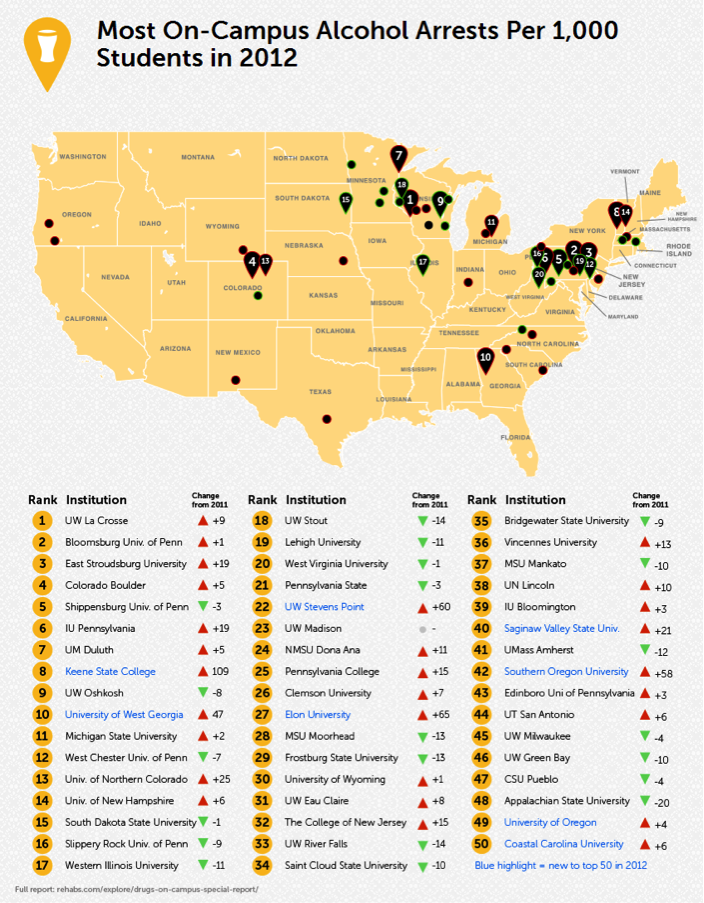 Here are the colleges with the most on-campus drug arrests per capita in the 2012 reporting year.

Rehabs.com notes the fact that a school had more arrests does not necessarily mean there were more arrest-worthy incidents on its campus. Some universities who have fully commissioned police departments might issue more citations than universities with security departments who may choose to issue a warning in lieu of a citation. Scott Rohde, chief police at UW-La Crosse believes there’s a link between the kind of policing done at the University of Wisconsin and the presence of a number of UW schools on the list, and SUNY Oneonta spokesman Hal Legg thinks that the information Rehabs.com shared demonstrates SUNY’s effectiveness in policing, the decisiveness of their response when illegal drugs are found, and their position –plain and clear- that “illegal drugs have no place at SUNY Oneonta”.