If you ever step foot in New York City, you will notice the multitude of food carts and street vendors strategically located on crowded street corners. Though New York is typically associated with hot dogs and pretzel stands, nowadays those are just there for the tourists and more often than not, street carts these days serve Halal food.

Halal technically means an action permissible by Islamic law, but we will just focus on its associations with food here. The preparation of Halal food has many specific requirements for slaughter to ensure a respectful, quick, and painless death for the animal. Here in New York, Halal food is typically associated with the beloved shawarma, lamb and other meats on a vertical spit, and chicken and rice.

How do I even begin explaining the magic that happens at this one midtown street corner? It has come to a point that when I tell people I grew up on the Avenue of the Americas, they would reply, “OH! Chicken and rice!” I mean, yeah, sure. We’re on the same avenue, albeit twenty blocks apart; I digress. The point is that the popularity of these carts has reached unbridled bounds that Boston students will drive to New York for dozens of orders to re-sell them for charity fundraisers. I know. Crazy. 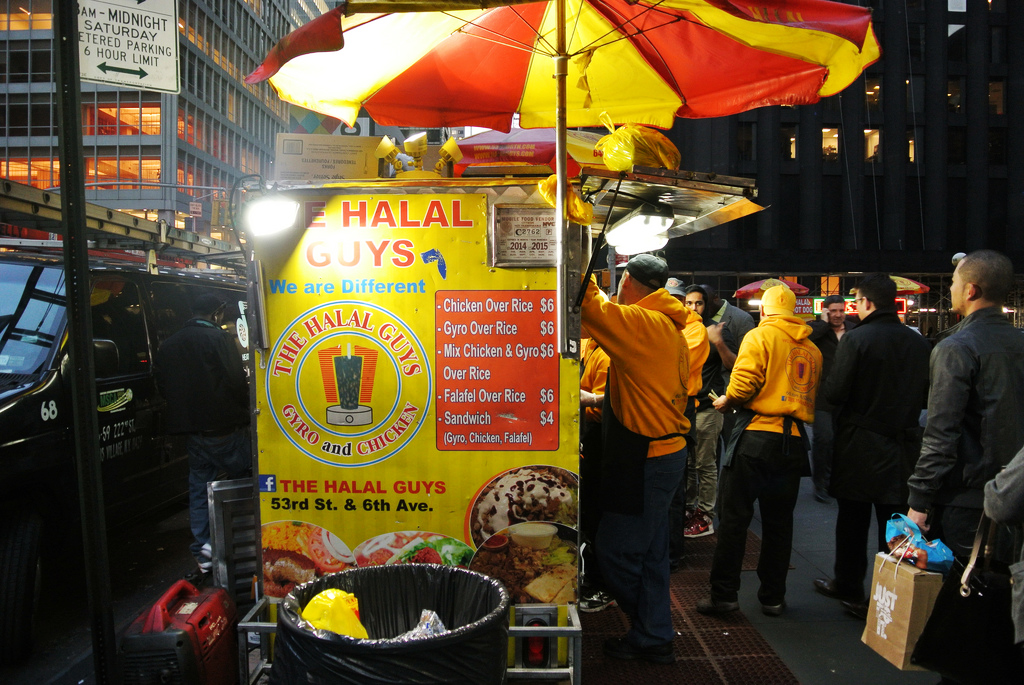 Anyways, what goes in the $6 mouthwatering circular tin that these guys produce over hundreds of every night? It’s simple: yellow turmeric basmati rice, Halal chicken/lamb, lettuce shreds, grilled pita, and sauce. The infamous white sauce and the fiery hot one is what set these guys apart from all the other countless Halal carts around New York City. It’s hard to put down in words, but it’s sweet, tangy, and addictive. Do not skimp out on the white sauce. On the other hand, you should use the hot sauce with extreme caution. Also, get your water at the corner on 6th (also owned by these guys).

Honestly, I’m just an overall huge fan of Halal food. They have food carts and trucks down because you get your food the moment you order it and not ten miserable minutes of waiting on the street later. I usually opt for the lamb or mixed meat over the chicken because it tends to be more tender, and I always ask for extra pita. That with white sauce I could potentially eat all day.

Note of warning: This place gets packed (20+ minutes of waiting in line) when the sun goes down and before the sun rises. But its various locations are opened seven days a week and during the day times as well. I may have visited one or two times too often during regular dinner hours, and tonight may just be another one of those times.