Why You Need to Visit New Orleans- The Food! 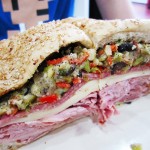 Many people know New Orleans for its annual Mardi Gras celebration. Mardi Gras or “Fat Tuesday” is traditionally the last day of the Christian calendar before the 40 day Lenten countdown to Easter. In New Orleans, Mardi Gras is characterized by week long Carnival celebrations consisting of, but not limited to, booze, beads, Bourbon Street, , and overall debauchery.

But if that’s all you think about when you hear New Orleans, Louisiana (NOLA), you are seriously missing out because NOLA is one of the most vibrant and culturally rich cities in America. I could go into the history of New Orleans with the Louisiana Purchase and all, but in brief, it is a melting pot of America, French, Creole, and African people. With such a mix of different cultures, there was also a melding of religions, in which the mystical Louisiana Voodoo finds its origins. New Orleans is also the birthplace of jazz music and where the jazz culture is still alive, abundant, and accessible. You can encounter countless number of musicians showcasing their talents just by walking down the streets in the French Quarter or visiting the renowned Preservation Hall. But by far one of my favorite parts about New Orleans is the distinctly delicious Creole inspired cuisine.

Here are some foods that you have to try when you’re down there:

Gumbo is perhaps the most well known southern Louisiana specialty. It’s a hearty stew flavored with meat, shellfish, sausage, celery, bell peppers, onions, and spices. It is thickened with okra, spices, or a roux. Gumbo is associated with the amalgamation of cultures in this region of the United States because the dish draws influence from the French, Spanish, native tribes, African Slaves, Italians, and Germans.

The origins of po-boys are not clear, but when I was at New Orleans’ Southern Food and Beverage Museum, there was a story that involved streetcar strikers receiving free baguette sandwiches. It involves two brothers in 1929 offering sandwiches made from leftovers to streetcar drivers during a strike. The sandwiches were filled with gravy and trimmings or gravy and sliced potatoes and were sold for a nickel a roll. Because of this, they became known as poor boys, and the name eventually passed down to the fried oyster or shrimp sandwiches we still eat today. I went to the famous Johnny’s Po-Boys to try one for myself. Johnny’s has been around the French Quarter since 1950 and is known for his sandwiches. These days you can get anything on a po-boy ranging from alligator sausage to crab cake. I got the fried shrimp, but I will definitely be back for a catfish po-boy soon.

Beignets are fluffy pillows of fried dough dusted with powdered sugar. It sounds simple, but the soft slightly chewy interior is hard to master and it’s only good when eaten hot and fresh out of the fryer. Popularized in Louisiana by French colonists, the beignet is now a staple of Creole cuisine. When you visit the French District in New Orleans, you have to visit Cafe du Monde. It’s been in the same location since 1862, serving the best beignets and the popularized cafe au lait. In New Orleans, a cafe au lait is much more than just coffee with steamed milk. At Cafe du Monde, they also mix the coffee with chicory, giving it a more bitter taste that is offset with the milk or the sugary fluffy pillows of perfection. There’s no better match. After a walk through the French Market, stop by Cafe du Monde for a beignet and cafe au lait. During the days, the takeout counter can get crowded, so I recommend getting a table (the turnover is quick). It’s worth it, and it’s a lively corner to enjoy an afternoon break and to watch the tourists and marching bands pass on Decatur Street. But even if you have a beignet craving in the middle of the night, no worries! This cafe is opened 24/7.

A muffaletta is a large Sicilian sesame loaf made popular by Italian immigrants to New Orleans. The sandwich originated at Central Grocery in New Orleans and is a wonderful combination of said loaf plus loads of marinated olive salad, capicola, mortadella, salami, pepperoni, ham, Swiss cheese, and provolone (I know, sodium overload. What are you going to do about it?). Now, this olive salad is the magic to this sandwich because otherwise it’s just any other Sicilian! It’s an addictive mixture of olives, celery, cauliflower, carrots, sweet peppers, onions, capers, parsley, pepperoncini, oregano, garlic, vinegar, herbs and spices. Reading about it definitely does not justify its deliciousness, so you’re just going to have to go down there to try it for yourself.

When I eat crawfish, I try not to think about them too hard. They’re shrimp-sized but have a hard shell and large head like a lobster. Really, theses “mud bugs” are critters that occupy freshwater in Louisiana. Even so, you cannot deny the sweetness of the less than bite-size meat when you finally get through the tough exterior. Each year, millions of pounds of crawfish are harvested and generally eaten locally in Louisiana at crawfish boils. They’re in season February through June, so catch them while you can!

Linda Y. Yung is a die-hard New Yorker working towards a career in dietetics with lofty goals of improving the American diet. She is a proud double Jumbo at Tufts University, having received her Bachelor of Arts in International Relations and her Master of Science in Food Policy and Applied Nutrition. Linda can also be described as any of the following: aspiring jet-setter, amateur tai chi master, or a hopelessly addicted NBA fanatic. She can be reached at www.lettucespoon.com or linda@introamerica.com.