What is Associated with Greek Life? 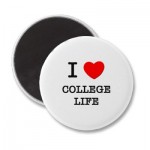 For those of you that have been in an American college for a little while, if you pay attention to the students around you, you probably have noticed that some of them often wear shirts with several greek letters on them. At first you might take a wild guess that it could be a product line from a clothing brand. Later you realize that you see those letters on book bags and other accessories, or even some of the houses on campus.

What do those letters mean? Well, today we’re going to take a look at a core part of the culture of American colleges: fraternities and sororities.

Fraternities and sororities are usually undergraduate student organizations, named with greek letters. Being involved in a fraternity or sorority is called having a a “greek life”. Every greek organization has its own vision and mission, and exists for specific purposes. Usually they aim to help members develop social skills, take opportunities to practice leadership, support each other to succeed, and take social responsibility by giving back to the community.

Due to the large variety of different types of greek organizations, it’s hard to include them all in just one article. I’ll only going to cover some of the major things that fraternities and sororities do.

1. Brotherhood and Sisterhood
Just by hearing the terms “brothers” and “sisters”, you probably already sense the strong bond between greek members. When you join a greek organization, you call other members brothers or sisters to symbolize your close relationship with them. This pushes the friendship to a level that’s beyond just acquaintances. Once initiated, you get to move into the chapter house and live with other members. (Greek houses are usually on campus or somewhere close to campus). Members usually take pride of their own greek organization. There’re a lot of brotherhood/sisterhood events throughout the year. It could be as big as a brotherhood/sisterhood retreat or a summer field trip. It could also be as small as going out for dinner, or sitting down and to have a chat together.

2. Although there’s a variety of greek lettered organizations and they differ by function, most Greek letter organizations are social organizations. No matter which type of greek organization you join, you will have to deal with a lot of different people in a social setting. Greek organizations give you a platform to meet new people and build up your social network. In colleges, fraternities throw parties almost every weekend. Those fun parties keep the campus alive and exciting for the students. Social events are not just about party, though. They organize other social events such as going bowling, or watching sports together. During homecoming week, a lot of alumni come back to visit the chapter. Chapter members get to meet alumni and hang out with them to further develop their network.

3. Academics
A lot of people assume those in the greek system have lower GPA’s since they always have so many events and they go out to parties very frequently. However, that’s not necessarily true. All fraternities or sororities set minimum GPA requirements for their potential members before they even join the organization. For members that are already in the house, they have study tables and are required to meet the minimum study hours. If your grades start to go down, you might get a warning from the chapter. When your grades fall below the chapter standards, you might even get put on academic probation. That might lead to penalties such as not being allowed to attend social events or doing community service hours.

4. Community service and philanthropy
Every fraternity and sorority has their own philanthropy and a charity foundation they support. For example Breast Cancer Foundation is a very popular choice for a lot of the sororities. Greek organizations organize big philanthropy events to raise money for their philanthropy, and because they believe in contributing to the society by giving back to the community, they do a lot of community service, such as helping cleaning nursing homes, picking up trash on thehighways, or feeding people at homeless shelters.

Did these things I mentioned sound appealing to you? Going greek is a very popular thing to do in colleges. If you want to get very involved and further experience the American culture, then joining a fraternity or sorority might be something you want to consider.